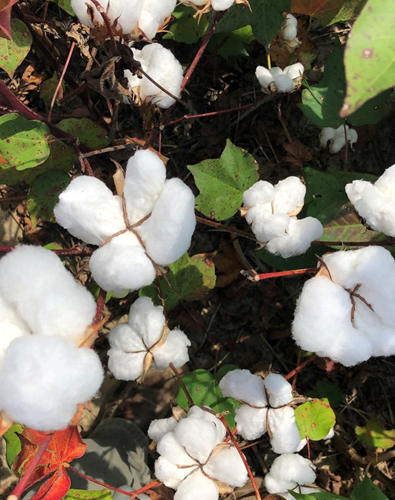 Cotton from the Hardwick farm is sent to Vidalia Mills where it is spun, dyed and sewn into denim jeans. Photo courtesy of Hardwick Planting Company.

When you think of the agriculture industry, images of chickens, cows and corn fields may come to mind. But while you imagine a farmer standing in a field with dusty overalls and a pitchfork in hand, agricultural producers throughout the state are using broadband to program tractors and analyze field data.

And key to his daily functions and his farm’s success is broadband. Paying bills and balancing finances is just as important to his job as harvesting crops, and it’s all done with modern technology.

“You have to have access online to just to function in today's world,” he said. “The way that we run our operation would be virtually ground to a halt if we did not have broadband.”

Beyond the administrative duties Hardwick carries out in his office, the planting company also uses internet access out in the field.

“In today's modern agriculture, we do a lot of precision ag, sustainability, access to data and things like that,” Hardwick said. “And what a lot of people probably don't realize is that the equipment that we use today is actually connected via modems to cell towers. They feed data straight into our data platforms where we use that information to better understand how our fields performed.”

Before broadband, taking advantage of precision agriculture was a much more burdensome process. Farmers walked to the machines, plugged in USB drives, downloaded the stored data and brought it back to their offices. With internet, precision agriculture is easier, more reliable and more efficient.

Hardwick said that when he has a combine harvesting crop, he can instantly see the data in his office and make real-time business decisions.

“I can say okay, this field is performing way better than expected,” he said. “I want to take advantage of a higher corn price right now, and I know, or I at least have a very good understanding, of what my production is going to look like versus having no clue.

“I can't tell you how much time and effort I save by not having to go physically to a machine and get data out of it,” he said. “It shows up through the internet through the systems that we subscribe to. You can't do that without good broadband.”

As with virtually every industry, the pandemic affected how the agriculture world operates.

Although it is typical for salespeople and farmers to meet face-to-face, the Hardwicks invested in teleconferencing equipment to maintain important business ties.

Hardwick even sees videoconferencing becoming a more permanent fixture of his business. For example, he has a consultant who lives in Baton Rouge during the offseason and it’s easy for him to include him in all the meetings, even if he is three hours away.

“I think we all kind of griped about having to do that, but it opened up more opportunities where we can meet with people farther away,” he said.

In the middle of his property, a Verizon broadband tower provides strong signals throughout the farm. A blessing, as Hardwick calls it, especially in Tensas Parish where more than 98% of residents are without access to high-speed internet, according to the Federal Communications Commission.

On top of access issues, with a median household income of $27,500, broadband is a luxury that many residents in Tensas cannot afford. For the large-scale operation on the Hardwick farm, broadband access on a fiber optic line costs about $500 a month.

Even with access and means to afford it, some farmers still do not fully embrace broadband.

Hardwick said that a lot of farmers in their 60s or 70s “couldn’t even fathom” the way he leverages technology. The agriculture industry is an increasingly older community. The average age of a farmer in the United States is 58 years old, according to the United States Department of Agriculture.

And while some of these farmers are eager to embrace technology but lack the digital literacy to take advantage of broadband on their farms, others simply don’t have the desire.

“I mean, even the older farmer that doesn't want to do a lot of broadband, they still have an iPhone in their pocket, and so they're using broadband,” Hardwick said. “Some farmers, especially the older they get, they don't want to embrace that, and it's challenging.”

But without broadband, Hardwick argues that it is difficult for a farm operation to compete.

“It is going to be a fact of life going forward in agriculture,” he said. “It's technology intensive, and it’s data driven. Because at the end of the day, we are in an industry where we do not get to tell the consumer what the price of our product is; it is determined by market.”

An agriculture business that does not leverage broadband may be able to survive going forward, but according to Hardwick, it must embrace modern technology to truly thrive and advance.

“The name of our game is to produce as most efficiently and cost effectively as possible,” he said. “And technology is a great way of helping us become more efficient.”