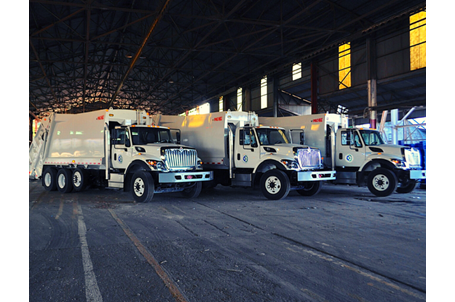 BATON ROUGE, LA - Think about the saying “When life gives you lemons, make lemonade.” The applications for this adage are limitless, and for Keith Hanson, Shreveport’s chief technology officer, his lemons were unreliable broadband usage maps. And his lemonade? Garbage trucks.

Hanson was appointed to his position in January 2019. As he stepped into his role, Mayor Adrian Perkins charged him with a major responsibility—implementing universal broadband service. In approaching this monstrous task, he decided to start by studying where the fiber was located in Shreveport and where people were using it.

“In 2019, the maps were still absolutely awful,” Hanson said. “Effectively, [internet service providers] could claim service to one house, and the entire census block is considered covered. And so it's really unreliable to understand how many people are adopting internet connections.”

To map the digital divide, his team needed to brainstorm a low-cost, accurate method to assess the issue that was better than paper surveys. Hanson recalled a government-technology meeting he attended and how one of his counterparts in another city identified potholes with the help of garbage collectors.

The city’s technology team attached a GPS chip to a Raspberry Pi, a small single-board computer, aboard each truck. The devices detected service set identifiers, or Wi-Fi networks.

“If someone has Wi-Fi, bleeding out of their house, blasting their SSID into the streets, then there’s a high likelihood that there's an internet connection behind that Wi-Fi connection,” Hanson said.

And the total price for the entire fleet was less than $6,000.

With the newly charted maps, Hanson discovered a clear digital divide. The team found that on the east side of Interstate 49, residents benefited from dense broadband coverage, but on the west side, in a neighborhood of about 80 homes, there might only be four or five Wi-Fi access points.

But in a city where almost every home has a Comcast wire next to it, according to Hanson, he first did not understand why so many homes lacked Wi-Fi. After digging in to the problem, he found that while some residents are not aware of federal subsidy programs for broadband, such as the Affordable Connectivity Program, others simply do not trust ISPs because of previous run-ins with providers.

“Rural digital divides have all the same problems we do, but they lacked a wire next to them,” he said. “So it's a very obvious first step, right, you’ve got to get the wire there…but in urban digital divides, it's a little more multilayered.”

Hanson noticed that during the pandemic, residents would often park in the lots of city buildings and recreation centers to access public Wi-Fi they needed to work and learn virtually.

With the newly created broadband maps, the city IT department was able to clearly demonstrate the digital divide in Shreveport, allowing the city to dedicate nearly $3 million to expand its wireless networks.

“Just like they would sit in the parking lot, they could sit on their porch now, or if the signal is strong enough they can get it inside their house,” Hanson said. “So it's not perfect, right? It is not a true solution in my opinion, but it is going to definitely get utilized.”

Beyond providing residents with free access to Wi-Fi, the expanded networks demonstrate how if broadband is very affordable and easy to adopt, people would take advantage of it.

When speaking to the importance of broadband, Hanson said it starts with the simple stuff. After a long day at work, many people can turn to their favorite Netflix shows or the evening news. It starts with entertainment, but internet is also essential to finding work or applying to government assistance programs.

“I think it's easiest to explain when like my son has a question, I Google it,” Hanson said. “We go to Google, we ask Google out loud, we look at the results, and I’m teaching him how to Google and use the internet. I don't have to also tell him to be aware of the megabytes you're using every minute, right? That's just like not a layer we think about.

“Whereas most of our digitally divided are constantly aware that they have a data cap, and it's going to be mega expensive if they go over it…you're cutting off whole sections of our digital society from people who could benefit from it when they don't have easily adoptable, affordable connectivity.”

As a public servant, his ultimate goal is to attract people to the city and create a thriving community in which everyone has an opportunity to advance.

There is no single, straightforward process for implementing universal broadband in Shreveport, he said. But with innovative approaches such as using garbage trucks to detect Wi-Fi signals, Hanson is making progress.

“I don’t think there is an easy solution to addressing the urban digital divide; it’s multilayered,” he said. “But we have to address it. It has to be addressed.”

To learn more about the digital divide in Shreveport and the city’s mapping project, visit http://digitaldivide.shreveportla.gov/.